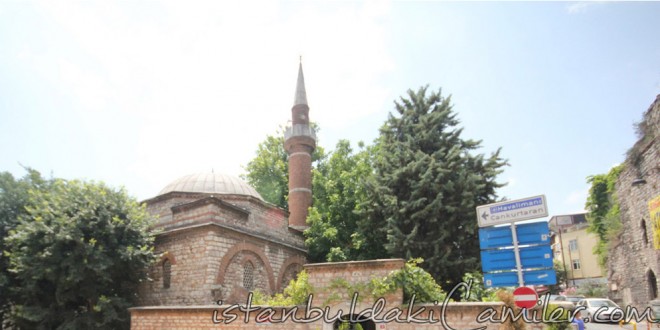 Ishak Pasa, one of the Grand Viziers of 15th century was originally a Greek who was educated in Enderun “the palace school” as a Muslim and had ascended the Grand Vizierate from treasurership during the reign of Sultan Murat II.

Ishak Pasa was deposed just before the campaign over the Akkoyunlu and Mahmut Pasa ascendded the Grand Vizierate fort he second time. After the ascension of Sultan Bayazid II to throne, he was brought back to Grand vizierate one more time in 1481 and continued his post with successtill he retired in 1492. He died in 1497.

Ishak Pasha Mosque is located in the District of Cankurtaran, over the road that goes down from Bab-ı Humayun (Imperial Gate) to Ahirkapi square. The viemity, the road and the mosque share the same name: Ishak Pasa. Although there is no definite date of its building it is assumed that it was built sometimes in 1485.

The minbar of the mosque was built later for Mehmet Pasa who was one of the Viziers of Fatih Sultan Mehmet. The mosque was renovated in different times by different people. Due to a big fire that broke out in the vicinity in 1918, the mosque and the hamam were ruined and renovated. The last and major renovation took place in 1951 when it was totally renewed.