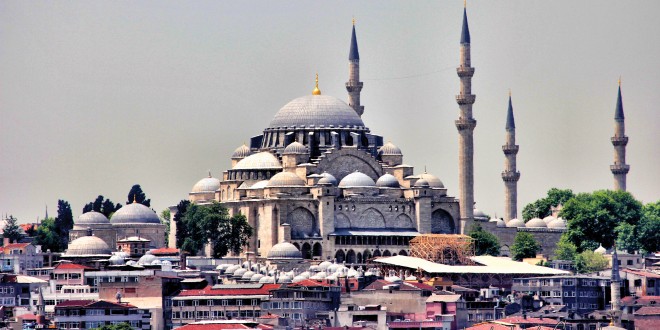 The Süleymaniye Mosque is the largest square-based semidomed mosque (3100 m²) to have been designed by Sinan. The two semi-domes are situated in the direction of the mihrap, a plan we see in Saint Sophia and later in the Bayezid Mosque (1501-1505). Sinan had a very strong desire to surpass Saint Sophia, which was very much admired by the Turks. It may have been at the sultan’s request that he opted for a plan similar to that of Saint Sophia. However, if the two buildings are indeed similar in terms of their general plan, the Süleymaniye is superior to Saint Sophia in terms of proportions, spaces and the rationality of the bearing system, as well as both its interior and exterior perception. The differences between the two religions in their approach to space has also had its impact on the building.

The transition between the central and lateral naves is provided by two small and one large arch. The same rhythm can be noticed on the lateral façade and the cupolas covering the lateral naves. In the flanks, the arches supporting the dome end in a series of graded steps. The arches is filled with a partiton wall pierced with Windows. At a lower level, the lateral naves are covered by a rhythmic succession of large and small cupolas. Sinan claims he was the first to implement such a design. With all the se gradations, the mass of the mosque takes on pyramidal external proportions.

On thesides, two-storeyed eaved riwaqs are situated between the dome supporting piers that gradually descend to the ground. This new solution, first implemented in the Şehzade Mosque, is repeated in its two-storeyedversion in the Süleymaniye and the Selimiye mosques. Such external riwaqs or galleries met with great success, and would continue to be used in large mosques after Sinan. Water taps for ritual washing were installed below the riwaqs at the basement level. The mihrab façade on the other hand does not exhibit the same level of achievement, appearing as a mere buttressed retaining wall. As for the minarets, they are situated at each of the four corners of the courtyard. The two nearest to the mosque are 76 m. high and decked with three balconies, while the two on the other side of the courtyard are 56 m. high and have two balconies. The main portal of the courtyard is very high and furnished with three rows of Windows, giving a palatial appearance to the façade, an effect which Sinan did not try to achieve in his later works.

Süleymaniye Complex
Built by Kanuni Süleyman, it form sone of the highest points in the city skyline, standing on one of the highest hills of the Istanbul peninsula, from where it can be seen form numerous places. Among these are the areas of Fatih, Eminönü, the Golden Horn and Galata, as well as Üsküdar and Beylerbeyi on the Asiancost. The mosque and the other buildings have been placed at different lavels through an arrangement of terraces and retaining walls. Sinan brilliantly managed to make the best of the terrain and to create a very impressive symmetrical composition. The complex is composed of four madrasahs, a Hadith school (dar-ül hadis; a scholl specialised in the study of the Hadiths: sayings and deeds of theProphet reported by followers and tradition), a medical school, a primary school, a hospital, a refection hall, a guesthouse, a caravanserai, a Koran school, special rooms for visiting students or trainess, shops, a public bath and the tombs of Kanuni Süleyman, his wife Hürrem Sultan and Sinan himself. Together with those of Fatih (the Conqueror) and Atik Valide in Üsküdar, this complex constitutes one of the three largest Ottoman complexes. All the buildings of the complex fit in harmoniously with the towering central mosque, while the courtyards, streets and passages between the neighbouring walls and buildings form an interesting combination of exterior spaces.