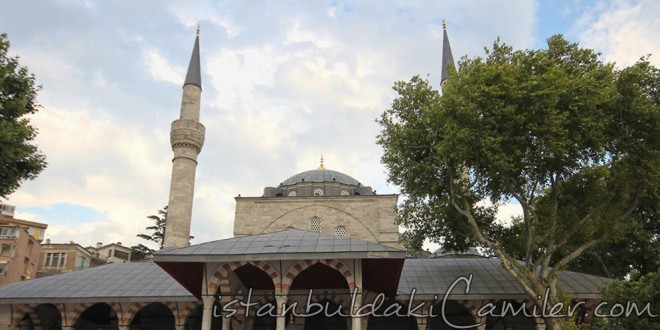 Mihrimah Sultan Mosque, Uskudar: Ordered by the daughter of Kanuni Sultan Süleyman, it is part of a complex which is masterfully integrated into a sloping site which reaches down to the sea shore and includes a madrasah, a guesthouse, a refection hail, a primary school and a caravanserai. The tombs were added later on. The guesthouse and the refectory were destroyed by a fire in 1722. The caravanserai has not survived.

The first mosque to be designed with a semi-dome by Sinan, this building has its main dome supported by

semi-domes on three sides, with the effect of widening the inner space. As one finds oneself under the dome as soon as one enters the mosque, the feeling of depth is very limited. But one is also immediately surrounded by the ambient bare space. An extra covering has been added in front of the middle part of the portico, which softens the hardness of the entrance façade. The mihrap (niche indicating the direction of Mecca) front is particularly successful, with its semi-dome, exedras and small cupolas, its graded wall and its round and arched windows.