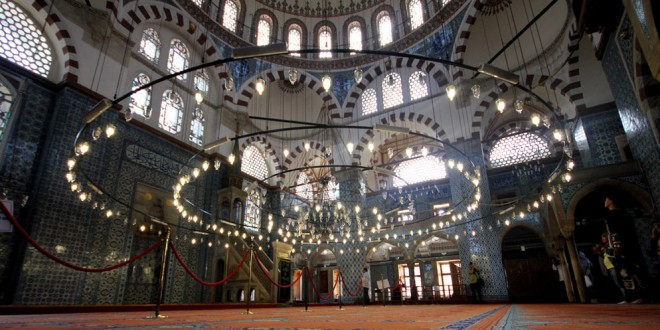 The Rustem Pasha Mosque was built after the deaht of Rüstem Pasha, one of Sultan Süleyman’s Grand Viziers (Sadrazam) and the husband of his daughter Mihrimah.

Covered with flat roofed cloister vaults, the lateral galleries reach the central area. Cupolas cover the corners while stabilising turrets have not been used. The mosque being situated in a very busy commercial district, its basement was designed to accommodate shops and ware houses.

The mosque is thus perched one storey above the Street, which –especially if we consider the city walls that then stood along the sea shore- must have enhanced its silhouette. The mosque level is reached though four staircases, two of them leading on to the galleries a storey further up.

These extra entrances add an interesting touch to the mosque, which is also very famous for its tiles. Here too the portico is surrounded with a secon done. As in the Kara Ahmet Pasha Mosque, the row of Windows on both sides of the entrance runs all along the height of the portico. With is octagonal plan, the Rustem Pasha Mosque is definitely a forerunner of the Selimiye Mosque in Edirne (1568-75).