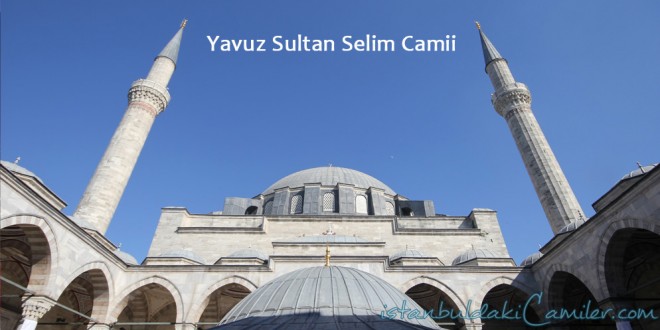 Yavuz Sultan Selim Mosque: The mosque from which the locality derives its name is located in Fatih was built by Suleiman the Magnificent in the name of his son Selim I on the fifth hill of seven hills of Istanbul which overlooks Golden Horn. The construction started in 1522 and was completed in 1529.

Mimar Acem Ali is the architect of the mosque. The mosque having a quadrate plan has a 24.5 meter dome and is 32.5 meter high. The mosque has two minarets. The wood handworks in the mosque are examples of perfect pearl- carving of the period. On the wall on the pulpit which is kiblah wall there is a cover in a showcase brought from Ka’bah.

The mosque is in the form of kulliye. The kulliye consists of the Mosque, the mousaleum, primary school and the poorhouse. The poorhouse does not exist today. There are mousaleums in the backyard of the mosque which is on the kiblah side. Along with the mousaleum of Selim I, there are Shahzadah Mousaleums, and the mousaleums of Hanim Sultan, Hatice Sultan, Hafsa Sultan and Ottoman ruler Abdulmecid I. Yavuz Sultan Selim Mosque has been restored for mant times so far.

The last restorations was made by General Directorship of Foundations and completed in 2009.