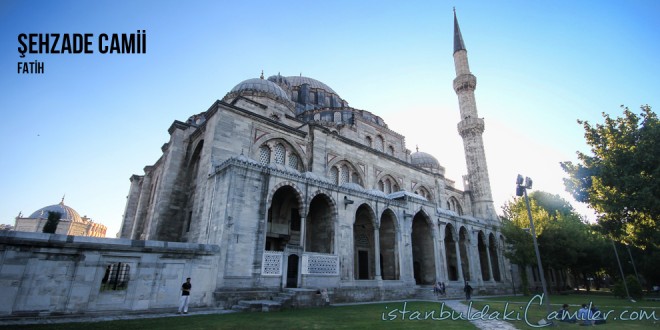 This mosque was dedicated to one of the Princes of Suleyman the Magnificent, who died young: Sehzade Mehmet, the son of Suleyman and Hurrem was born in 1521 and died in 1543. Some believe that Sinan, was building it for Suleyman, but, experimenting with the weight of the dome, came to the conclusion that he could build a bigger one, and as a result Suleyman dedicated it to his son.

The Sehzade Mosque is a monumental work of its time. It was based on a square and the central dome supported by four semidomes on four sides. This way, it had perfect symmetry. Sinan himself did not repeat the plan. However, all monumental Ottoman mosque built in later times, were built according to this plan.

The big outer yard of Sehzade Mosque has six doors. The most appealing part of the mosque is double minaret having double balconies each on both sides of the walls of main door. The austerity in other mosques and minarets does not exist here. The ornament at these minarets designed by Arhcitect Sinan is unique.

Sehzade Mehmet Complex is the first “selatin” complex constructed by Architect Sinan. It is composed of the mosque, primary school, secondary school, barn, caravansary and tombls.

It was said that the “green column” standing at the edge of the cemetery wall of Sehzade complex facing the street was erected at the location deemed to be the center of Istanbul.

Sehzade Mehmet Tomb is one of the most beautiful tombs of Ottoman arctitecture. A timber throne was embedded on the sarcophagus. The tomb of Sehzade it is full of colorful tiles. Below the mid sarcophagus Sehzade Mehmet, on his right Sehzade Cihangir, on his left Humasah Sultan were buried. On the left of Sehzade’s tomb, the tomb of the prominent Grand vizier Rustem Pasa with rich tiles is present.

The “madrasa”, positioned at a distance from the mosque, was partially demolished. The caravanserai of the complex is used to serve as the laboratory of the Vefa Lycee, which is an early 20th century building of the National Architectural Movement.